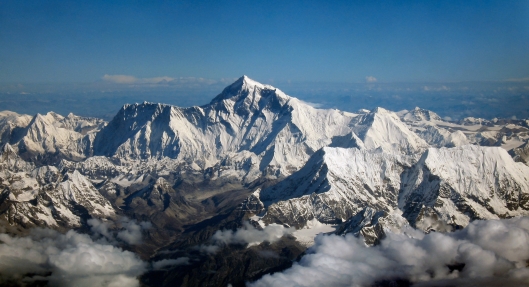 Once upon a time, there was a mountain known as Peak 15. Very little was known about it. Then in 1852, surveyors found it was the highest in the world, and they named it Everest.

As with other significant challenges that we can identify in life, many people have been driven by a passionate desire to conquer peaks all around the world. This is just one illustration of those of us who can identify their significant challenges and rise to them. This sharp focus, determination and courage turns ordinary citizens into people who are invariably on a mission. People who know what they want.

When we know what we want to accomplish, almost anything flowing from that can be driven by a single unified goal, objective and mission.

Of course, we should also have an idea of how we might go about meeting our challenges, whilst at the same time recognising that few things waylay legitimate ambitions more than being held-hostage to the means. This requires that we keep our prime objectives to the forefront of our minds – always.

Having a clear objective is very important, whatever that objective may be or whatever reasons there are to achieve that objective. The English schoolteacher and mountaineer George Mallory was asked why he wanted to climb Everest. He replied “Because, it is there”. Mallory stated a clear objective and an easily comprehensible reason. Everything else flowed from that.

In business and business IT, the question of “to what ends?” must be ever present. It must be present before the initiation of projects, during each and every project phase and when projects are concluded. The “to what ends question” is closely related to a good understanding of the challenge and a clear understanding of the objectives – including the costs of meeting the challenge and the various risks associated with ignoring or addressing that challenge,

But, in order for the “to what ends?” question to work effectively, we must have the intelligence to understand the question, the acumen to interpret the results and the courage to act on what is discovered, what is known and to not shy away from or bury any of the risks that we identify.

Jawaharlal Nehru, the first Prime Minister of India, is in record as saying “Failure comes only when we forget our ideals and objectives and principles.” Judicious words that are worthy of our fullest attention.

Which brings me to Big Data.

If we ask what the prime objectives of Big Data are, we can easily get the impression that it is very much about the sale of infrastructure technology, the massive contracting, outsourcing and offshoring of services, and the purchase of licences. These are all perfectly valid objectives if you are a seller of technology and services in the IT market. They are not, however, reasonable objectives for businesses who are not ostensibly present in the IT markets, primarily because in many cases Big Data cannot pass the business oriented “to what ends?” test.

The trouble is, very few companies can actually benefit from doing Big Data themselves. Yes, Alphabet and Alibaba can, and so too can the likes of Amazon. But, these companies are exceptions and not the rule.

But why should we be concerned about asking awkward questions of Big Data?

My conservative view is that more than 90% of Big Data projects will fail.

But apart from throwing money away on these projects, are there any other down sides?

Almost invariably, these Big Data initiatives take away funding and focus from more beneficial data oriented projects. They are frequently accompanied by a plethora of vague, ambiguous and seductive promises. They are initiatives that occupy a space and a position which cannot be justified in any rational, cohesive or coherent sense. And, they promote lethargy, lazy thinking and mendacity.

Big Data has been overvalued to such an extent that there is a real danger of us filling the entire known universe with Big Data flim-flam, moonshine and baloney.

Claims for Big Data are almost never substantiated in any meaningful and measurable sense. Big Data success stories are seldom if ever verifiable. Indeed, tangible details of Big Data projects are frequently conspicuous by their absence.

Because of these very facts, Big Data is the negative equity of IT, the toxic collaterised debt obligation of data and a money-sucking pimp-show of a business distraction.

As professionals we should doing our level best to avoid facilitating Big Data hype. As individuals, whilst we must understand that we are not the holders of virtue nor the paragons of truth, we should at the same time show a little more dignity, decency and self-respect when it comes to ‘opportunities’ to play free-and-easy with reality and the facts.

In addition, the aspects previously mentioned also promote Big Data fatigue. People simply give up or give in when bombarded with a continuous and overwhelming surfeit of Big Data guff, hogwash and drivel. This in turn leads to self-perpetuating sloppy reasoning and ultimately to the vice of lying to ourselves and then to other people. At this point we place ourselves on the Skid Row of IT, and that’s not a good place to be.

Once upon a time, there was a mountain known as Peak 15. Very little was known about it. Then in 1852, surveyors found it was the highest in the world, and they named it Everest.*

“Mount Everest is very easy to climb, only just a little too high.” The Observer, 25th January 1953.

Here’s the link: https://www.linkedin.com/groups/8338976 or if you prefer, go to the LinkedIn web site and search for The Big Data Contrarians

You may also like to check out my blog: http://www.goodstrat.com