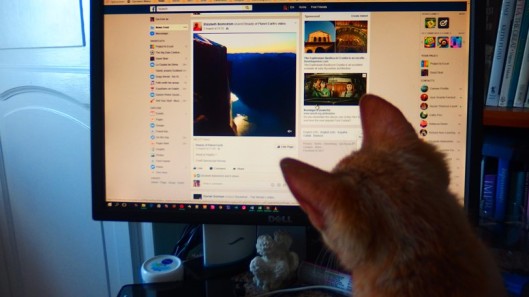 The prevailing conventional wisdom is that innovative technologies and their novel use are having an effect on many peoples’ lives. Indeed, the fascination with the possibilities offered by social media, the internet and the age of data is becoming all pervasive. Of course, not all is goodness and light. Some aspects, such as Denial of Service attacks, phishing without a permit and creatively-ambiguous chimping, mark the down side of this story.

Let’s take a look at some of the prevailing trends.

Clive: “You ought to be careful where you’re pointing that thing, you might have someone’s eye out”

Clive: “To your own selfie be true, Del”

A selfie is a self portrait, a photograph that one takes of oneself. It’s typically snapped with a Smartphone, webcam or digital camera, and then shared via social media, such as Facebook, Twitter or Pinterest. Everyone is talking about it and everyone is doing it, from the guy in the corner shop and the girl next door to the Pope, the President and the Fantastic Four. In fact, the selfie word has become so ubiquitous that it was added to the Oxford Dictionaries Online in August of 2013.

All hail the selfie!

Derrick: “Oops a daisy, I think I might have gone viral”

Clive: “Oh, bloody hell, no! You ought to get that seeing to”

Have you ever posted anything that has gone wildly viral? Sure, we would all like to do that, right? But what does it mean? Look at it this way, something, okay that something is usually a video or to a lesser degree a photo selfie, goes viral when it gets viewed and shared over social media by a humungous number of people. Things started to go viral on internet way back in 1995, first with a video known as ‘The Spirit of Christmas’, which was closely followed in 1996 with Ron Lussier’s 3D ‘dancing baby’. Viral is here to stay and sites like YouTube, Veoh and Metacafe will be intent on making that ‘present reality’ a cast-iron ‘future fact’.

Derrick: “So I said to him, look mate, post or get off the blog”

Clive: “Well that told him right and proper; that put him in his place, didn’t it”

With the advent of the blog anyone who has the means at their disposal can be a published author, journalist, critic, storyteller and poet. Many individuals and institutional entities have blogs, they can be the work of a single author or of multiple-authors, and they can focus on single subjects or take an eclectic view. Multiple author blogs are used by educational establishments, pressure groups, advocacy groups, political parties and the media. Indeed, one of the most popular and acclaimed blogs is in fact The Guardian’s ‘Comment is Free’. In addition to regular blogging, the rise of social media, in particular Twitter, has heralded the concept of micro-blogging.

As Descartes might have famously said “I blog before the after-shots in the Horse and Cart, therefore I am”.

Clive: “Derrick, I’ll put it to you straight mate, an Internet forum, or bulletin board, is an online discussion site where people can insult each other in the form of posted messages”

Everyone can have an opinion about just anything, whatever the content, time, place and form, there will be someone who wants to comment and forums provide a conduit for that opinion.

We can now comment on news, editorials, opinion pieces and other content. Bloggers use forums for similar reasons; community groups, sports clubs and social clubs use them; unions use them; political parties use them; companies use them for customer interaction, for product issues, questions and reviews. In fact, wherever there is a blog, an opinion, a product, a service or a media outlet there will most likely be a forum.

Derrick: “Err, I didn’t realise I had so many friends until I joined Facebook”

Never in the history of human endeavour have so many people had so many friends, followers and connections. The friend is the new fan. But it goes further than that. Now people can connect using social media, they can become interested, involved and attached. It’s not just about business and commercial link-ups any more, it’s all about romance, duplicity, complicity and ‘you know what’.

Derrick: “Have you ever thought about why we pay with money?”

Who uses cash these days? Who even uses credit cards?

Okay, many people still do, but that’s not the point.

There are many other ways of paying for ‘stuff’, and there’s an attendant plethora of alternate payment options, including Bitcoin, PayPal, digital wallets, peer-to-peer money transfer, and other payment platforms and networks, to satisfy all needs and desires. In fact, in a number of areas alternative payments have become the foremost form of online payment for consumers.

Derrick: “I went down the cafe this morning, you know, for a bacon sarnie, cuppa and a chat”

Derrick: “Not really, no. I will have to reply in the not-affirmative as I was the unwitting victim of a Denial of Tea Attack”

Unfortunately the internet age isn’t just full of goodness and light, it does have its down sides. One of these is the vulnerability of web sites. Sure, it is much harder to hack into a web site than it was a few years back, but that’s not the only way to mangle an online presence. A denial of service attack will attempt to overload and crash a web site by issuing a massive parallel series of high frequency request to that site, resulting in the potential incapacity of the site to handle all of those requests.

This has been a mere exploration into the territory of cross-silo digitally enabled post-modern anti-natural fake-humour. I hope you got something from it.

In the meantime, here’s a bit of Bach.