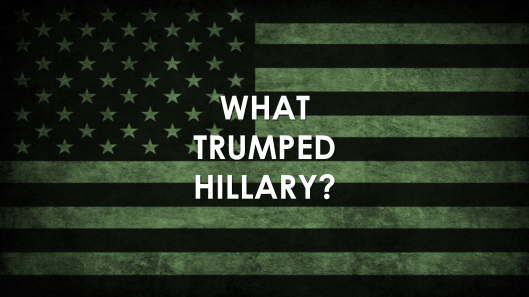 US liberals still don’t get it, do they? I was particularly unimpressed by The Guardian’s US correspondent, Richard Wolffe, who wrote this of Trump “He is the very man Hillary Clinton warned us that he would be.”

Like as if we really need the advice of an entitled and arrogant warmonger about any other unhinged member of the globalised political circus.

But, hold up, before you jump to erroneous conclusions, there’s nothing I find particularly endearing about Donald Trump. He’s not even funny. However, Trump is the 45th President of the United States of America. Thanks in no small part to the Democratic National Committee’s and Hillary Clinton’s insistence on the Presidential election being about Hillary’s turn.

What the DNC still don’t seem to get – and their supporters in the presses – is that there are a lot of people out there, right across the political spectrum, who really dislike Hillary Clinton.

Clinton is a confrontational and aggressive warmonger, whose arrogant and bellicose triumphalism has proven to be every bit as bad as what Trump’s attitude might be. Indeed, Clinton was the only candidate for the 2016 Democratic presidential nomination who supported George Bush junior’s invasion of Iraq, and in flagrant violation of the UN Charter, the Nuremburg Principles, the Peace of Westphalia and international law.

But that’s not all. People will remember Obama for the Patient Protection and Affordable Care Act, but they might also remember Hillary Clinton for the handling of the Universal Health Coverage domestic policy in Bill Clinton’s first administration, a colossal screw-up which some claim led to the Democrats losing control of both the Congress (the first time since 1954 that the Republicans gained a majority there) and the Senate.

Also, Hillary Clinton’s position on the Middle East wasn’t exactly conducive to peace. And whilst Obama was heavily criticised by some for not being an unquestioning supporter of the Netanyahu government, and even George Bush junior had his moments of frustration, Clinton comes with no such baggage. Which, in some quarters, is another reason why she is disliked.

So, Trump didn’t win because of Farage, Putin, ballot rigging or a vast global right-wing conspiracy. In fact, Trump didn’t even win. Trump became the President of the most powerful military nation on earth, because the Democratic Party were too arrogant for their own good. Trump became President because Hillary Clinton and the Democrats, with the connivance of the liberal media, threw the election.

That’s all from me for today. Many thanks for giving me your time and please don’t hesitate to leave your comments below. So, until our paths cross next time.

Brexit is not legit –

The Madness of Brexit –

The Conceit of Remainers: The Brexit Boloney Continues– https://goodstrat.com/2017/08/01/the-conceit-of-remainers/

Can Ruth Davidson save the Tories? –

Can you read? Be honest, now –

The Martyn Jones Solution: From Strategy to Jihad – https://goodstrat.com/2016/02/21/the-martyn-jones-solution-from-strategy-to-jihad/