Catriona Arbusto, an exceptionally talented management consultant, is coming to the end of her presentation. There are people in the room (actually far too many people for it to be simply quirky) staring into the comfortably-numb, banal and vacant order of their smart phones.

Needy brows are wrinkled and restless fingers are fidgeting with coloured shapes and symbols that take on a calming life of their own within the virtual isolation-zones of the small-screened comforters.

Occasionally someone will glance up.

Catriona’s voice wafts above the haze of stupor.

“So, just to wrap things up, I would like to recap on the key principles of data warehousing and business intelligence”. People shuffle nervously in their seats. There is a sense that the veneer of patience is wearing thin, that people will not be able to maintain their temporarily acquired sense of decorum for much longer, that something should happen, but nobody knows quite what.

And then it happens. Jenny Spinner, the Financial Director steps up to the plate “Well, may I just say that was an excellent presentation from our consulting partners, and I am very grateful that you all have taken the time to talk to us on the subject of ‘where data housing is’. So, come on gents, a round of applause for our consulting partners”.

The assembled staff duly put their hands together, more out of duty than as a gesture of appreciation and respect. Jenny, well aware of the situation, considers that her corporation might just have far too much of its share of organisational autism. She says nothing more, and leaves.

As the audience leave the conference room. Bob the CIO asks ‘the gang’ to stay behind. “Oh! Hey fellas! hang-on, hang-on! Don’t run away yet, we have things to discuss”. Discretion is obviously not Bob’s forte “So, Gents! Can we as our American cousins might say ‘shoot the breeze’ for a moment?” The mass exodus is halted. But only the faithful actually return.

The group now only consists of Bubba the CTO, Merv the Chief BA, Jimmy Jammy the MIS Manager, and of course Bob Schwachköpfe, the CIO.

With only the four of them left in the room, Bob, strides haughtily up to the whiteboard, armed with a collection of marker pens. He lets rip. “Correct me if I am wrong gentlemen, but this is how I see it”.

Bob launches himself feet first into expounding his own take on the days meeting. “From what I could tell from the presentation this is what our management consulting company is proposing”.

Bob uses the whiteboard to draw a copy of a diagram from his notes. The diagram is elaborate, with many lines, colours, containers, boxes and labels. Just like this: 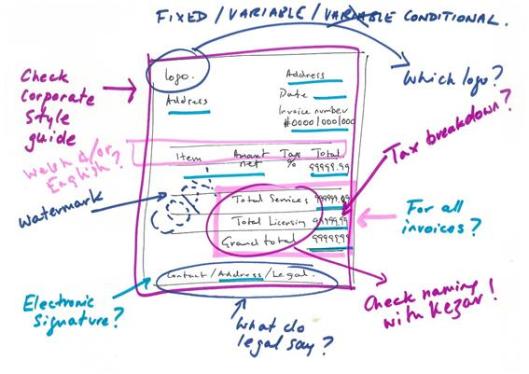 [Okay, maybe not like that… but, that’s the idea]

Bob stands back to admire his work. “This, gentlemen, to put it mildly, is what our over-paid, over-estimated and overbearing consulting partners were saying we need. Am I right?”

The rest of the gang nod in agreement. “Now, I don’t think we need all of this nonsense in order to produce a pile of reports. I think its overkill, overpriced and over-engineered theoretical tripe. So this is how I see it”.

Bob highlights the end user tools, the reporting layer and the source systems, he then proceeds to wipe out the data warehouse, the data marts, the staging areas, the ODS, the message queues, the ETL, and the metadata. See, you don’t need to have all of the BI DW nonsense, we can just hook up the reporting tools to the operational systems, and if the users want to do any fancy analysis on the data, then they can just import it into Excel, and away they go.”

The rest of the gang look on in silent awe. Jimmy Jammy pipes up. “Actually that’s quite amazing, Bob. In fact, it’s downright totally tubular. You’ve seen right through all their nonsense and balderdash again”, “Yep Bob, you sure have a well-honed knack for debunking the pompous consulting baloney”.

Bob beams appreciatively from ear to ear, a magnificent grin upon the face that lunched a thousand chips; supersized, pizza enabled and content. “Well, you know men, I’ve never been overly found of the stuffed-suit academic approaches to anything. Pragmatic! Down to earth! Get things done! That’s me”. Bob pauses and cues his people (for dramatic effect) and the rest of the gang respond to this cue by all muttering praise and nodding in sagacious approval, as Merv the Swerve breathes a deep sigh of relief.

Outside a sporty convertible, top down and radio blasting out, passes on a nearby slip-road. If thez had listened closely enough they might have caught the words to the song “I’ve nothing much to offer, there’s nothing much to take, I’m an absolute beginner”.

No one notices, no one makes any connection, everything external is alien. The gang disperse to their own individual cubical worlds as the car and the ‘message’ it carries fade into the distance and the twilight.